Misia - Another Red-headed Muse - Part One 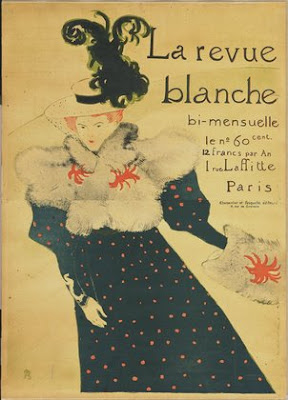 I had never heard of Misia until G-Pup bought me the book Misia, The Life of Misia Sert, by Arthur Gold and Robert Fizdale, second hand.

It turns out that Misia is one of the most inspirational muses and patrons of the Parisian avant-garde. Artists, musicians, writers and dancers at the turn of the (last) century were beguiled by her. A beauty in her time, Misia was painted by Toulouse-Lautrec, by Bonnard and Vuillard, and according to her memoirs, 7 or 8 times by Renoir.

She’s another in my series of red-headed muses and this gingersnap of a woman seemed to have her finger in all pies.

Misia Godebska, was born in 1872 in Russia. Her mother died in childbirth. Her father, the sculptor Cyprien Godebska, was engaged in the reconstruction of the Tsar’s palace. Remarried, he sent her off to live with family. She had a few idyllic years living with her grandmother in Belgium where she was found be a gifted pianist, only to be reunited with her distant father and step-mother in Paris. There Misia grew up in amongst the upper crust of French society, but she was shunted off to a succession of boarding schools and family members. 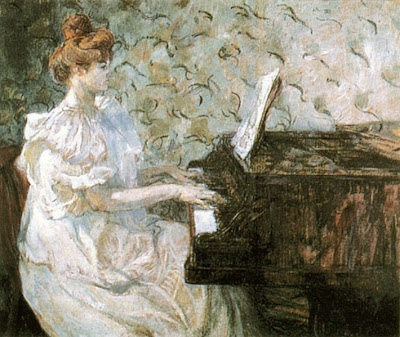 She married early, at the age of 16, to Thadée Natanson, a Polish ex-pat politician and journalist. Later he became the editor of the Paris arts magazine la Revue Blanche, focusing on the circle of the Paris avant-garde.

La Revue Blanche was published from 1891 to 1902. One had to know Misia before being published in the magazine and in turn, Misia only wanted to know those who were gifted. She knew almost everyone who mattered in Paris’s artistic circles. Her taste was original and discerning. Probably a true bohemian, she was unwilling to desert her money and her class.

The painters (Vuillard, Bonnard, Lautrec and Renoir) painted her and the composers debuted their masterpieces at her piano. Ravel and Debussy were frequent guests. Vuillard adored her. Stéphane Mallarmé wrote poetry for her. 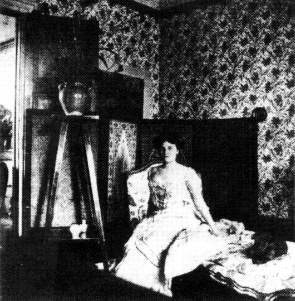 Although I don’t find her particularly striking, the painters thought her looks miraculous, with a legendary pair of legs and a dreamy bosom. Colette revolved around this group too, sporting a waistline almost as small as Misia’s. 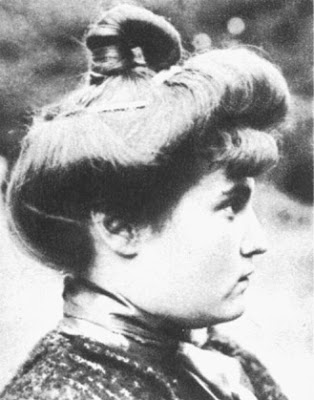 At a party of 300, thrown by Misia’s brother-in-law to celebrate the completion of nine large panels painted by Vuillard, Toulouse-Lautrec was the barman.

Misia ate up her husband Thadée’s money; as a patron she required plenty of material items. With the help of Thadée and his money she was able to entertain at their homes in the country as well. At one of these country parties, Misia caught the eye of the vulgar newspaper baron Alfred Edwards, editor of Le Matin.

Thadée Natanson was facing bankruptcy. Edwards bailed him out, on condition that he surrender his wife. Thadée and la Revue Blanche were saved and Misia was the price...

Email ThisBlogThis!Share to TwitterShare to FacebookShare to Pinterest
Labels: Femme Fatales, The Francophile, The Gallery, The History Lesson, The Time Machine

What a fascinating post! I had only heard of her mentioned here and there-briefly. Thanks for such a detailed account..can['t wait to read more:)

I had to smile at the end of your story, bad girl, making us wait!
I too don't find Misia particularly beguiling, but, personality can make all the difference....!
my my. never heard of the gal!
With all these painting of her that supposedly exist it might be nice to see a couple
Beth

Wonderful post......Oh I love these art history posts! You are so clever to make us wait, too. I am hanging on!

There must be something about red heads who wear their hair up in a bun like this. My mother is such a woman, and I have been astonished at times when we are out in public as complete strangers approach her and ask if she would consent to sit for a painting or a photograph. She has never said yes, but sometimes I wish she would.