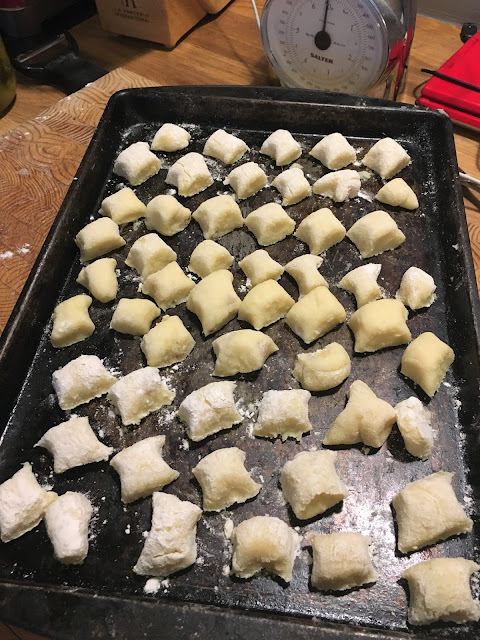 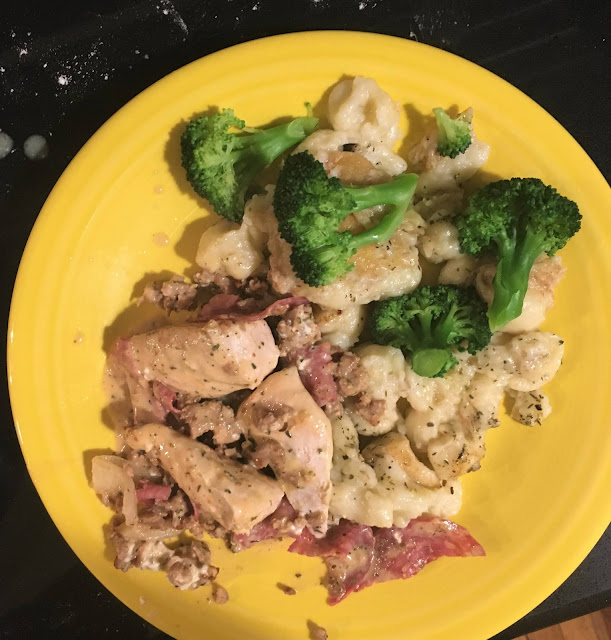 Posted by The Clever Pup at 6:47 PM No comments: 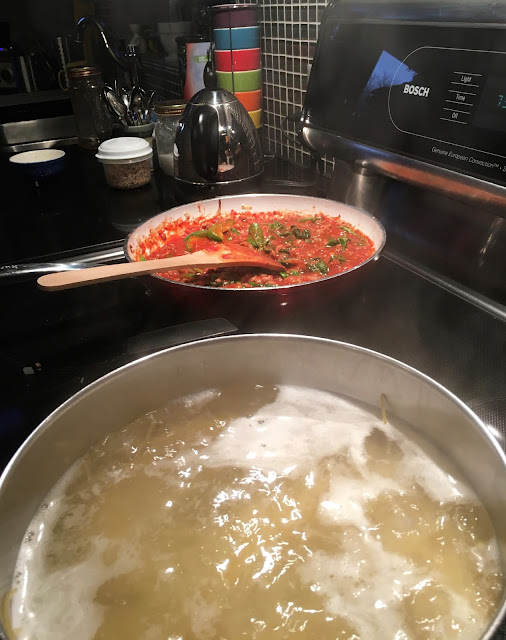 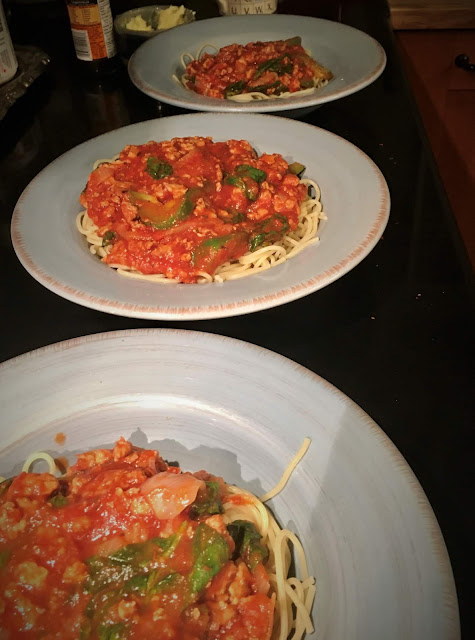 You know how it goes.

We used to have spaghetti every Saturday night when Noah was younger. Then we'd scramble to clean up so we could watch Saturday Night at the Movies on TVO. That's long gone, but I thought I could re-institute the spaghetti tradition.

Not much different here. I tried to make the ground chicken more beefy by dousing it in beef bouillon. We enjoy spaghettini more than its thicker cousin. I added onion, half a green pepper and a handful of baby spinach leaves. 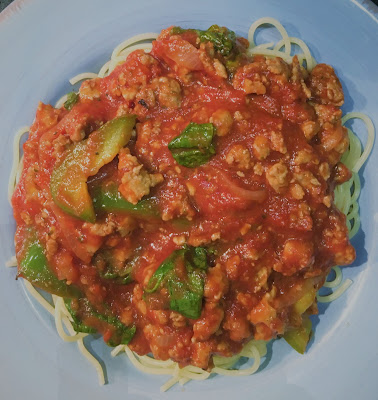 Next up: something with potatoes, eggs and 2 chicken breasts.
Posted by The Clever Pup at 4:19 PM No comments:

Email ThisBlogThis!Share to TwitterShare to FacebookShare to Pinterest
Labels: Meals in Less than 30, Plague Dinners, The Plague

What can I make with left-over Brussels sprouts, rice and frozen spinach pucks?

This was a very green meal, but the greener the better, right? 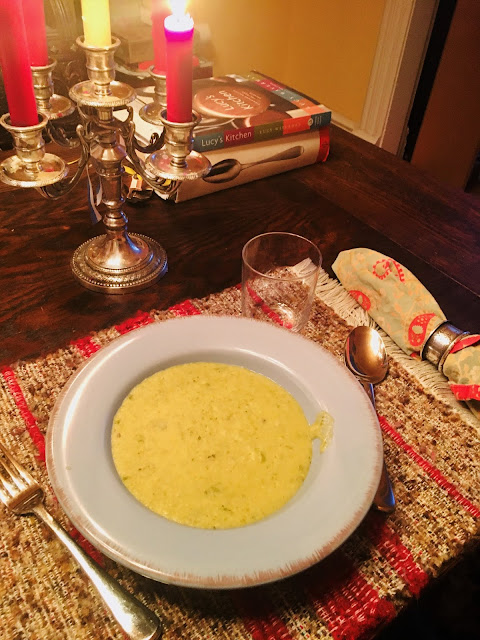 To make the soup:

This soup was very similar in flavour to a main dish I made the other day, so therefore it was yummy.

So I fried some garlic in butter and added 10 tailed left-over Brussels sprouts. Then I tossed in some left over rice (with turmeric) that I made yesterday. (Rice adds a thickness to the soup and will be undetectable once I puree it.) To this, I added my friends lemon zest and mustard. Stirred it about and added 3.5 cups chicken stock. I brought it to a boil, then simmered for 20-25 minutes. Does it need salt? Then I pureed it with an immersion blender.

The pasta I made used up some thawed spinach pucks. 4 or 5. Steamed.
Once cooled I put the steamed spinach in the "Oscar" blender that I've had since I was 21. I added 1 cup cottage cheese and a healthy dash of sea salt and about 1/2 a cup white cheddar. Parmesan would have been better but I didn't have any.  Then I "blitzed" it for about 10 seconds.

I boiled the spaghettini for the required time and I added one peeled of garlic to the salted water. I drained the pasta, and rescued the garlic. I added the garlic to the spinach puree and pureed it again for a couple of seconds.

The pasta goes back in the pot, the puree of spinach goes on top, and I stirred it about until all the pasta is green. 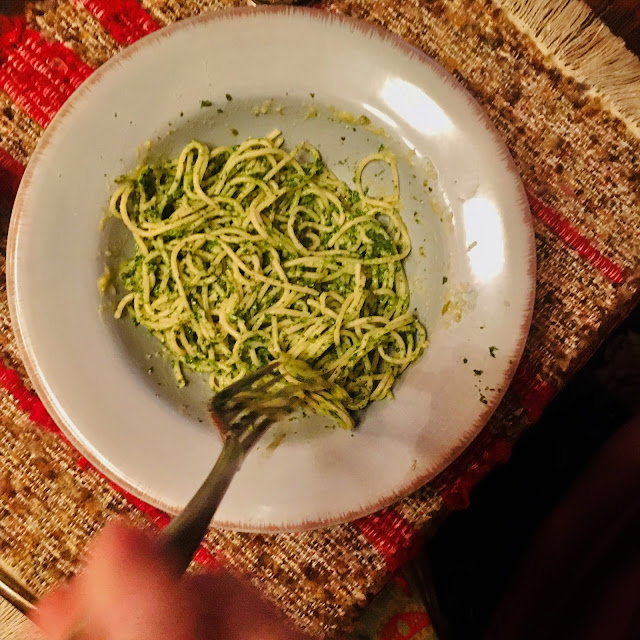 (Jamie makes this with Savoy cabbage, ricotta and parmesan, but I had none of that). I also forgot to take good photos.

Next. It's Saturday, so it has to be Spaghetti. Too much pasta perhaps? We'll see.
Posted by The Clever Pup at 6:57 PM No comments:

Email ThisBlogThis!Share to TwitterShare to FacebookShare to Pinterest
Labels: Meals In Less Than 60, Plague Dinners, The Kitchen, The Plague

What to do with left-over 6-layer dip, ground chicken and 2 tortillas.

Made for than enough for 3. Took 45 minutes. 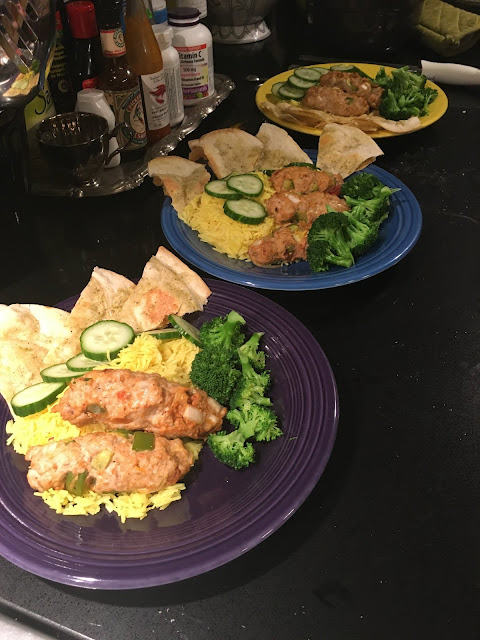 I found this  tasty, however ground chicken is pretty bland and hard to spice up. Without going into too much detail I was going to make torpedo-shaped chicken patties and put them in tortilla wraps. However, unbeknownst to me, we had only 2 wraps left. So I had to improvise.

I took one pack ground chicken, mixed it up with 1/2 cup 6-Layer Dip,(it's gone now),  half a green pepper and about a tablespoon of minced onion, some mysterious chili spice Noah brought home from work and salt. I formed them in to 7, yes 7 torpedo shaped  patties and baked them at 400 for 25 minutes. 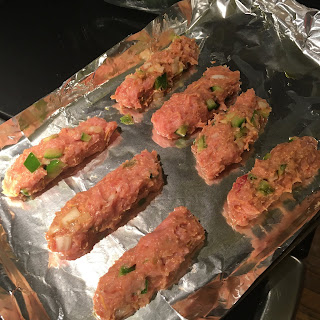 While this was going on I toasted the tortillas in the oven on one side for about 4 minutes to firm then up a little.

I added 1 tsp lime zest to about 1 tb mayo and a squirt from my plastic lime. My lime is from Italy so I feel somewhat better about not using fresh! No Realemon here and added  salt and fresh pepper to taste. 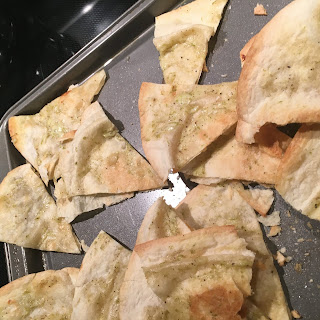 Spread on the cooled tortillas. Put back in the oven for 5-6 minutes.
When cool enough, scissor into equal-sized triangles.

Tomorrow: Can I make soup out of the left-over cauliflower? Can I replicate a Jamie Oliver pasta?

Posted by The Clever Pup at 4:57 PM No comments:

Email ThisBlogThis!Share to TwitterShare to FacebookShare to Pinterest
Labels: Meals In Less Than 60, Stay-at-Home Recipes, The Kitchen, The Plague 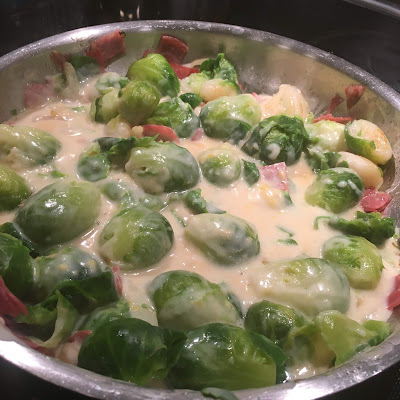 Gnocchi with Brussels Sprouts in a Lemon/Garlic Sauce

AKA Half a packet of Store-bought Gnocchi, Half packet of Salami, Brussels Sprouts


What can I make from the fridge without having to go to the store?

This one's a winner.

Slice the onion.
Slice the salami into strips 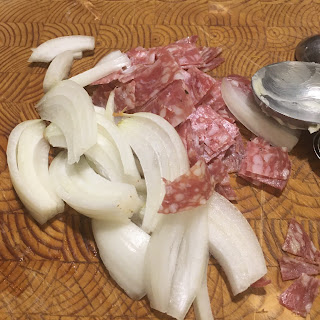 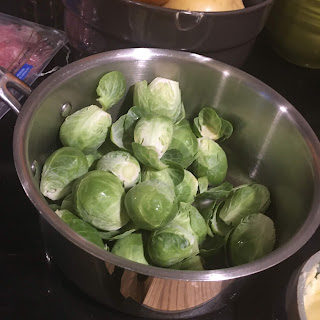 Make the white sauce this way:
Soften the garlic in the butter for about 5 minutes in a small saucepan on medium/low. This will smell GORGEOUS. Smoosh down the garlic with the tines of a fork.
Add the flour. Stir with a wooden spoon until all mixed.
Add a little milk until you have a smooth paste.
Add a dash of salt.
Add the remainder of the milk. Turn up to medium/high stir with your wooden spoon until no lumps remain and the first bubbles appear. Then reduce heat to simmer.
Stir in the mustard and lemon zest. Add a very small splash white wine. Keep saucepan on very low heat. Don't let the sauce boil. 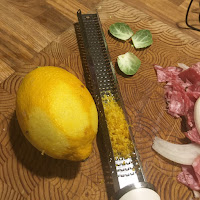 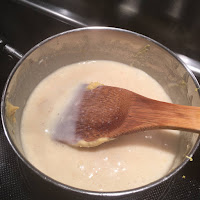 Next, fry the onion and salami in a little oil on a medium heat for 3 or 4 minutes

When the Brussels sprouts have about 4 minutes to go add the gnocchi to the pot. When the 15 minutes is up, drain.

Turn down the onion to low. 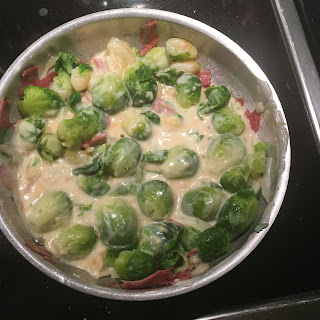 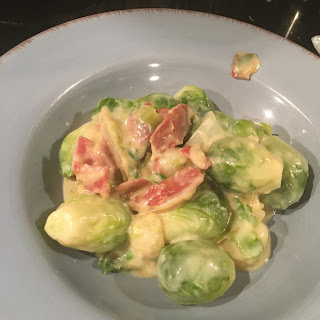 This was really good. My guys gave it a 9 out of 10. They raised it to a 9.4 when I made them pasta shells to go with the sauce. My original quantities were not enough for 3.

Next time, what can I create with ground chicken, left over 6-Layer dip and some left-over tomato sauce.