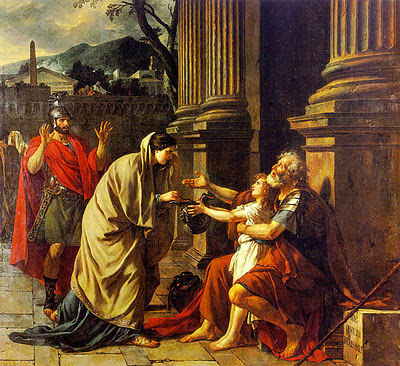 While I don't like Neo-Classicism at all, "small R" republicans ate this stuff up in Revolutionary France.

Here is Jacques-Louis David in full Neo-Classicism. The people of late 18th century France loved Neo-Classicism. Through coded allegories these paintings were an attack on the French Monarchy.  Here Belisaurius, a victorious Byzantine general, is depicted by David. Belisaurius was falsely accused of treason and was blinded by Emperor Justinian. Belisaurius fell from grace, was banished and reduced to begging. David uses an ancient or antique visual style in order to summon up Greek or Roman heroic themes. In the painting he is recognized by one of his former soldiers who is shocked to see him in such a position. The woman embodies mercy.

Around 1781  a similar scenario happened to a count who had a dispute with the monarchy. I've forgotten the Compte's name but instead of being blinded and banished he was executed. People of the day would have known exactly was David was trying to say in his painting. David was a radical Jacobin and a member of the Committee of Public Safety, another way of saying he was a republican. He voted for the death of King Louis XVI which caused his monarchist wife to divorce him.
Posted by The Clever Pup at 3:46 AM

Great painting! To be honest, I am more familiar with David's paintings during the revolution, not before. I wonder if the Count had one of those dreaded Lettres de Cachet that the public hated so much. Great post.