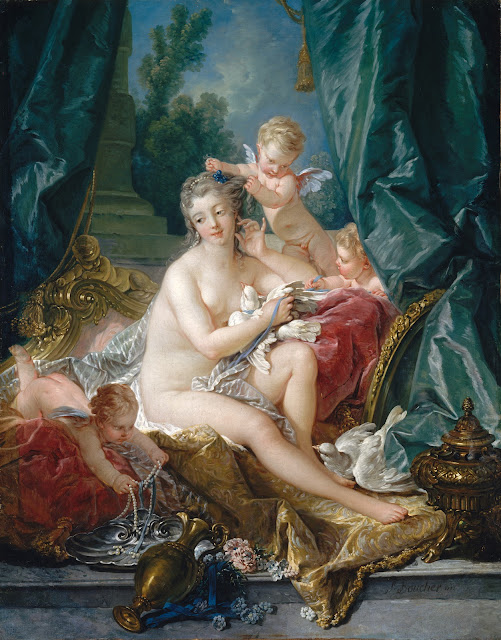 I've got to memorize 50 paintings for my Art History mid-term. I may as well kill two birds with one stone and feature my study notes here.


François Boucher was the epitome of Rococo painters.  Rococo was the ornate style of courtly decoration in 18th Century France. Paintings like Boucher's would have been displayed as one among many. The court considered  paintings as part of the luxury trade and were regarded as an artisanal product along with luxurious furnishings and decorative artifacts  Not segregated away in a gallery; Rococo paintings were displayed in the luxurious rooms found in 18th century chateaus.
Here François Boucher's Toilet of Venus depicts the standard mythological scene of Venus. Boucher was fond of paiting erotic pastoral scenes with rosy female nudes. In this painting, jewels, silks and ornaments tumble over the edge of the stage and into our visual space as if they are being offered or on display. These objects bursting forth also represent the luxury which the patron or member of the court could afford.

Rococo died out by the time of the French Revolution. The frippery of the Rococo era was replaced with the order and the seriousness of Neo-Classicism whose subjects began to reflect the republican values of the masses.
Posted by The Clever Pup at 2:41 PM

Email ThisBlogThis!Share to TwitterShare to FacebookShare to Pinterest
Labels: Artist's Models, The Francophile, The Gallery, The History Lesson