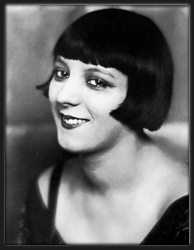 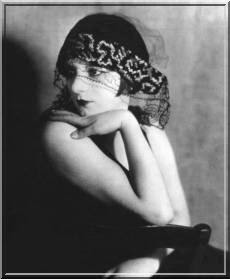 The liberated Kiki was a French artists' model, and a sometime nightclub singer, actress and painter. Mainly, she was a party-girl who was found in the right place at the right time.

Kiki was born Alice Prin in 1901. Her chosen name was simply Kiki, but was also referred to as Kiki de Montparnasse.

Kiki helped shape the social scene of 1920s Paris. Known by everyone in the circle of artists and writers that flourished in Montparnasse in the '20s, she was the muse and lover of several artists including Man Ray and posed for dozens of other artists.

I have a couple of books about her including her memoirs, but notably Kiki, Artists and Lovers, 1900-1930 by Billy Kluver and Julie Martin. It's one of my Desert Island Books.

I've saved this picture (below) for a couple of years. It's from The Style Scout; a street fashion blog out of London. I thought the young subject did an admirable job of recreating Kiki's look, whether intentional or not. (I think she knew) 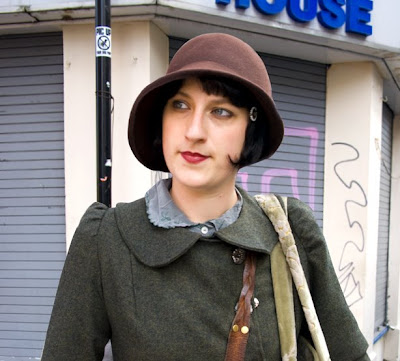 Email ThisBlogThis!Share to TwitterShare to FacebookShare to Pinterest
Labels: Femme Fatales, The Francophile, The Time Machine, The Wardrobe

I was hoping for a Kiki post...rushing like mad but thanks for the image & link to The Style Scout. Shall investigate. She looks terrific & comfortable--essential. And she resembles a friend down here, so that was fun & I'll send her your link.

Very interesting!
I once saw Fujita Tsuguji's Kiki at the exhibition but I didn't know about her at all. Thank you for sharing this!!

Thanks for posting. I can't wait to see if she led a wicked wicked life?