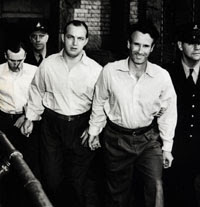 Daring Edwin Alonzo Boyd and his gang burst onto the front pages of Toronto newspapers due to a series of well-executed bank robberies and two breakouts from Toronto's Don Jail. Edwin Boyd's escapades are detailed in the current movie known in the US as "Citizen Gangster"

Boyd's swashbuckling style of hopping bank counters and lightning fast hold-ups riveted Toronto residents. The Boyd Gang's reign as Canada's most notorious crooks was relatively short but their escapades nearly made them local heroes until two of the members ruthlessly shot down two detectives, killing one.

Boyd was the son of a police-officer. With his face plastered with make-up and cotton stuffed in his cheeks to disguise his appearance, he robbed his first bank in September 1949. He escaped with the loot even though the bank manager shot at him as he fled. 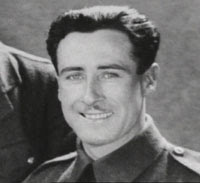 To see how well his disguise had worked, a few days later, he walked into the same bank and changed a twenty dollar bill with the teller he'd robbed. Since he wasn't recognized he decided to sharpen his skills and become a full time bank robber.

Boyd continued robbing banks, sometimes with his a partner, sometimes solo. At one robbery the bank manager grabbed a gun from a desk drawer and popped off a few shots at Boyd who returned fire. He had no choice but to turn and run without the money. Another time, Boyd was chased in his car by a bank employee, barely escaping.

Edwin Alonzo Boyd went on to hold up several more banks until his first capture in October 1951. His luck ran out on his last attempt. Everything went wrong. His partner was caught and squealed on him. He was soon behind the iron bars of the infamous Don Jail.

At the Don Jail, Boyd made friends with another bank robber, “Tough" Lennie” Jackson and a small-time crook, Willie “the clown” Jackson. The three hatched a sensational escape plan, added Steve Suchan (AKA Valente Lesso) to their ranks, and the legend of the Boyd Gang was born.

Lennie Jackson had a wooden foot. It came in handy to hide things, like hacksaw blades. The three of them used the concealed blades to saw through the bars on an outside window. On November 4, 1951, the three slid through the opening and dropped to the prisoner's exercise yard below. Lassoing the top of a surrounding wall with some tied bed sheets they climbed to freedom.

Steve Suchan had arranged a hide-out in Cabbagetown that they could reach quickly. Realizing they would need money to keep in-hiding for a while, they pulled off the biggest hold-up in Toronto's history.

After splitting the stolen money, Lennie Jackson and Steve Suchan left for Montreal and Edwin Boyd and Willie Jackson hid at Suchan's parents  in the west end of Toronto.

After Suchan's father stole most of the loot out from under them, the rest of the gang headed to Montreal and there they lived until Willie Jackson was returned to the Toronto Jail after being arrested for gun possession. They then drifted back to Toronto hiding out in houses on Sorauren Avenue with Suchan's folks and with his girlfriend Anne Camero in a rented house on Wright Avenue, the street where I live today.

On March 6, 1952, Police Detectives Edmund Tong and Roy Perry pulled over a black car containing Suchan and Lennie Jackson at the corner of College Street and Lansdowne. As Police Officer Tong approached the vehicle, he was gunned down and fell to the ground in a heap. They then peppered the police car with bullets. Perry was wounded in the arm, but Tong was to die several days later, but not before naming his killer, "Suchan."

The relentless manhunt was on. Suchan and Jackson who had escaped to Montreal were captured after a lengthy shoot-out. Though he had nothing to do with the shooting, Boyd felt the pressure. Boyd was the only gang member left to be captured.

Detective Payne discovered that Edwin Boyd was to move into an apartment he had rented on Heath Street. Hidden in a neighbour's house, Detective Payne watched Boyd move into the flat. Wanting to avoid a shootout, he waited until he was sure everyone was asleep. At the crack of dawn the police crept inside the house and captured Boyd and his wife while they were still in bed.

Boyd was once again a resident of the Don Jail and, incredibly, was put back with the other three gang members. With some metal, a file and saw blades, they were able to make a workable copy of one of the guard's keys. They could now get out of their cells in order to saw through some bars leading to freedom.

Just hours before Lennie Jackson and Steve Suchan were to be brought to court to answer for Detective Tong’s murder, the Boyd Gang staged a second dramatic escape that made them the most wanted men in the Canada. 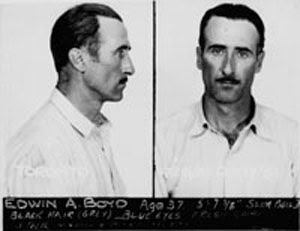 Find out what happens to Toronto's outlaws in an upcoming entry.
Posted by The Clever Pup at 10:34 AM

Can't wait to see what happens next. You sure do know how to fashion a cliff-hanger! :)