The Strike Turns the Clever Pup into a Flaneur Once Again

Just like dominoes... I saw a boy, 9 or 10,  trip into a display of mannequins at Galeries Lafayette and bang, bang bang, bang, bang - all five plaster ladies toppled onto the floor; their arms and legs falling off in the process. The poor kid. In passing I whispered, "C'est OK", but he started to cry despite his age. He told his mum he was hurt, but it was just his pride. The day before, my minibus driver told me that the word "gendarmes" meant "people with arms". Now these mannequins were "gens pas d'armes"

I started late. I was in no hurry and  prepared for the strike. After taking a video inside the Pantheon of  Foucault's original pendulum, I headed off to the Musee du Moyen Age (also known as the Musee Cluny) to see the tapestry of the Lady and the Unicorn, but I guess that will have to wait for next time because this Tuesday the Cluny was closed.

I carried on across the Seine via the Petit Pont and was surprised to see the area south of the Pompidou on Rue Saint-Martin was a very pleasant pedestrian area.


North past the Pompidou and the punks with their dogs intent on chasing the pigeons into the trees, and left on Rue Rambuteau. Onward past Les Halles. Les Halles looks dramatic on the outside, especially from the bird's eye view I've seen  in Paris from Above, but it's just a big mall - I gave it a pass. 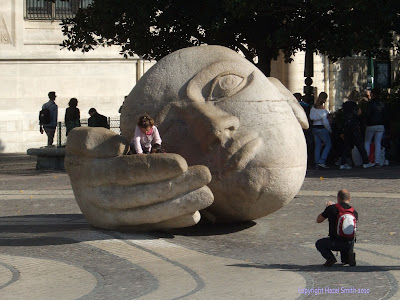 I stopped and collected my thoughts, organized my photos and checked my map on the terraced steps by Saint-Eustache with its adjacent labyrinth and giant buddha-like head.

The farthest point of today's orbit was the Galeries Lafayette, Paris's grand department store and by mid-afternoon I made it there.  But there's so much to see on the journey. Near Saint-Eustache is the Bourse, the Paris Stock Market with many well-heeled people lunching nearby. I came across Dehillerin, a fantastic cookware shop that Clotilde Dusolier mentions in Clotilde's Edible Adventures in Paris. A giant copper rooster was in the window. Was it a weather-vane or just a really cool objet d'art for the kitchen?

On my journey I found two covered galleries, or shopping arcades, Galerie Choiseul and Galerie Vivienne that I had made a mental note to find.  I actually did some browsing in a shop in the Galerie Choiseul and Galerie Vivienne is a splendid, glass-roofed place with great swathes of mosaic floor. I'd bought a book at the D'Orsay about Paris's covered passages because I didn't think I'd have to time find them. So I was pleasantly surprised when I did.

The Galeries Lafayette is a gem of the Belle Epoque. Its steel and glass dome rivals any kaleidoscope and has been designated as a historic monument.  I took a brass birdcage of an elevator up to the top level and walked the remaining way to the store's roof and found a smoggy (let's say steamy) panorama of the rooftops of Paris, with a view of the Eiffel Tower, Sacre Cour and the looming Opera ( which is much too big).


Speaking of the Opera, the Galeries Lafayette itself resembles a giant theatre. Looking up, the the layers of floors with their brass railings and uniquely painted ceilings  resemble a turn of the century theatre. On the first floor I attempted to get to the balcony to take other photos but I was hindered by a champagne bar in the way! 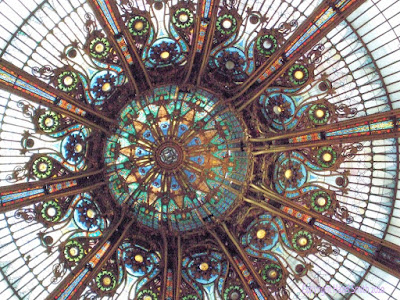 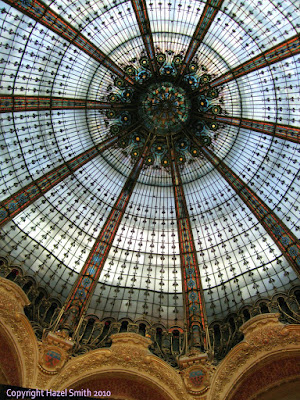 After taking pictures of the superb stained glass dome, I needed sustenance and found a tea room to my liking on the third floor called Le Galfa.. I ordered something delicious that roughly translated into a beef muffin club sandwich and I ordered two macarons - A caramel and a pistacio. Yay. I gave in.

Email ThisBlogThis!Share to TwitterShare to FacebookShare to Pinterest
Labels: Design/Decor, Interesting Spaces, My Photos, The Clever Pup's Paris Notebook, The Francophile, The Suitcase

Oh Hazel.....the photos are so nice.....especially the stained glass windows! Oh my! And the Pantheon, I can only dream about going to see it one day! Thanks you for these excellent posts!