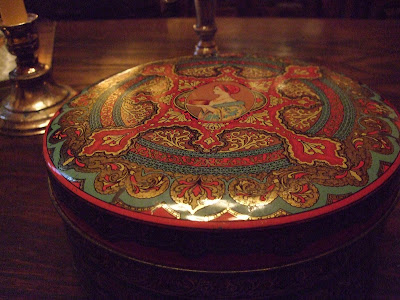 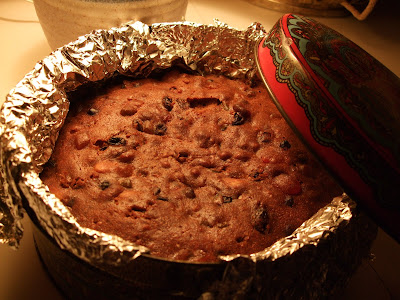 Ok - I made my Christmas fruitcake about 10 days ago. Now every 2 days or so I douse it with a small splash of Appleton's Dark Rum. It smells so good.

In a week or so I'll wrap it in an almond paste/marzipan hybrid. I can never find enough marzipan so I have invented an icing with ground almonds and almond flavouring. I add a little yellow food colour to make it more appealing.

Then after that dries I ice the whole thing with Royal Icing which, in turn, becomes rock-hard. But before that happens, I decorate it with Christmas figurines; paper boys, lamp-posts.

Lots of people joke about the unappetizing fruitcake, suggesting it be used for a doorstop or a hockey puck. There are several blogs written by detractors of the fruitcake. Well, Bah, Humbug. Mine's great. Oops! It looks like someone helped themselves to an almond.
Posted by The Clever Pup at 11:54 PM

Email ThisBlogThis!Share to TwitterShare to FacebookShare to Pinterest
Labels: My Home, My Photos, The Kitchen

Yours DOES look wonderful! It's gotta be better than my childhood memories of a dry, hard lump wrapped in foil, rotting in the back of the frige.

Fabulous wintery house painting, Hazel. I love it. LOVE it!!

And great vintage coat finds. You know how much I love retro coats!

I loved the Christmas fruit cake when I lived in the UK.
Yours reminds me of it, including adding the rum! I miss the plum pudding, too. So many rich goodies at Christmas time - at least the rum will give the cake a longer shelf-life, unless it is the most popular eat on your table!