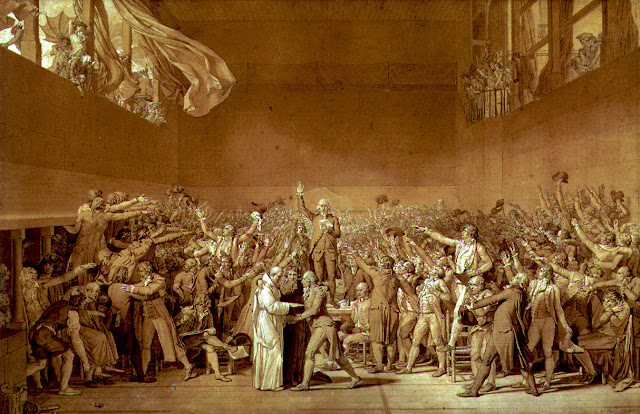 This pen and ink sketch by David was a precursor to a large scale painting that was left unfinished. It was to be painted on the basis of subscription and not enough subscriptions were sold to finish the work.

This is one of the most famous works of the French Revolution. A group forming an early sort of  representative government had been locked out of France's General Assembly. On June 20th, 1789, this group, dubbed the National Assembly, found their chamber door locked. They congregated at the nearby tennis court at Versailles and made an oath not to disband until the constitution of the France was settled. The oath signified the first time that French citizens formally stood in oppostion to Louis XVI.

The winds of change are blowing throw the window on the left. In the background and ominous bolt of lightning hits Versailles.

This fervid event may have been an overreaction as it was found that the doors to the Salle des Etats were closed because the King was still in mourning over the death of the Dauphin two weeks earlier. Hmmm. Riiight.... The Tennis Court Oath definitely greased the wheels on the road to the French Revolution.

The Oath was signed by 576 out of 577 members. In the bottom right of David's sketch one can see the lone dissenter, Joseph Martin-Dauch with his arms crossed and his head bowed.
Posted by The Clever Pup at 10:18 PM

I guess Mr. Martin-Dauch didn't buy a subscription either.

I guess not Kathy. Maybe I'll see you at the eco-chicks night.

Yes, it is a very famous work and one can't stop but admiring the detail and precision of the drawing, it's a masterpiece in itself! I even think that it is better as it is than painted (personal view).
Thanks for dropping by!